So far the project is framed around the question, "Is it meaningful to talk about queer spirituality?" (to which my answer is a resounding Yes). The reason I am asking the question is that some LGBT people reject the notion of a queer or LGBT spirituality because it sounds too much like essentialism; but because there is a distinctive queer experience, there is a distinctive queer theology and spirituality - not because LGBT people are inherently more spiritual, or only in the sense that people who occupy the role of outsider often have a shamanic quality about them (but the "outsideness" could be due to any aspect of the self, not just sexuality). As a bisexual, I do believe that spiritual androgyny is a desirable quality, as people who are stuck in one gender role are trying too hard to be normal, and it would be good if we all started just being ourselves and not worrying about conforming to gender roles; but then not everyone sees it that way.

Anyway, I am trying to identify distinct themes in queer spirituality, looking at Christianity, Paganism and some occultism. So far I have identified an interest in darkness (especially among LGBT Christians), receptivity and nature; justice and liberation; heroes and martyrs; finding the Queer in the Divine; finding the Divine in the Queer; the spiritual benefits of coming out. I am looking at LGBT art and writing, including blogs.
Posted by Yewtree at 7:54 AM No comments:

the damage caused by homophobia

Just found this leaflet, "If I told you" via QuakerPagan. It's a collection of essays by LGBT college students. Make sure you have a box of tissues handy.

to all you gays and lesbians here at Gordon, who I’m sure will pick up this collection of essays as eagerly as I will, and will probably try to read it as nonchalantly, hi. I wish we knew each other, because we would probably all be a lot happier and healthier if we had a support system. Hopefully someday, even here at Gordon, we will.

The contributor goes on to suggest an experiment for straight people to help them understand what it's like being in the closet:

So here’s my experiment for you: Spend a day, in your head, imagining that people look on straight people the way they look on gay people, and adjust your behavior accordingly, to keep anyone from finding out where your desires lie.

Stop yourself every time you are going to comment aloud on the merits of the opposite sex. And when you are only thinking it to yourself, imagine that your whole life people have told you that the thoughts you are thinking are evil and hellbound. If you have a significant other, spend a day without them. Don’t contact them in public, or let anyone know how much you love them. Don’t let anyone know if you are thinking of entering into a committed, monogamous relationship with them (being gay means having to specify up front that your relationship will be committed and monogamous), and don’t let anyone know how safe and accepted and loved—how whole—their presence makes you feel. Because if people knew, who knows what they would say or how they would treat you from then on.

But don’t try this experiment for more than a day, because you will probably start to feel lonely, depressed and isolated, and there’s no need for that. You’re straight.

Posted by Yewtree at 9:57 AM No comments: 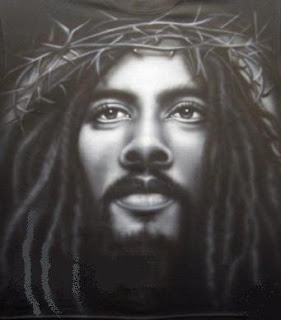 Well, obviously Jesus wasn't blond, or auburn-haired, but must have looked Jewish - "a brotha of colour" as the expressions website puts it. But there is a time-honoured tradition of portraying deities and holy people to look like oneself, so why not a Black Jesus? If you can have a white Jesus (and he obviously wasn't white), then why not a Black Jesus, a Chinese Jesus, a Queer Jesus, even a female Jesus?

Those hard-boiled rationalists who assume that all Pagans must be nutters (like the tiny handful of reburial extremists who want to rebury all human remains) are themselves being irrational by assuming this. A moment's thought (or even Googling) would reveal that there is a broad spectrum of Pagan views on this issue, as on many other issues. Most religions have a broad spectrum of views, in fact, so why should Pagans be any different? I agree that reburial extremists are nutters (why aren't they putting the same amount of energy into campaigning against climate change, for gods' sake?) but that's no reason to tar all Pagans with the same brush.

Examples:
The kind of people who are advocating reburial regardless of any archaeological value of the remains are out-and-out holists. All is one to them — time, space, matter and spirit — there is no acknowledgment of context or other viewpoints.

I reject both these extremes.
Posted by Yewtree at 9:26 AM No comments:

www.museum.manchester.ac.uk/aboutus/ourpractice/respect/
Posted by Yewtree at 9:22 AM No comments:

podcast interview with me

Alun Salt interviewing me in a podcast about the issue of human remains in which I rant extensively about compromise and why it's such a good idea. Also, did I mention how much I think archaeology has contributed to contemporary Paganisms? I may have mentioned it once or twice...

It was nice that the interviewer (Alun Salt) decided to do the interview because he read the Guardian article and thought, surely this can't represent the views of all Pagans, as he knows a few Pagans and realises how diverse we are.
Posted by Yewtree at 2:22 PM No comments:

Posted by Yewtree at 1:11 PM No comments:


What's wrong with the chocolate Jesus? Is it that his genitals are showing? Or is it that he is made of chocolate? OK, so it is milk chocolate - should have been dark chocolate, but hey. Also it's perhaps somewhat ambivalent that the sculpture appears to depict the crucified Christ, rather than the sweet Jesus image, but Christians have been saying for centuries that he is the source of all sweetness, so why not. Maybe the Catholics who complained are worried that someone is going to eat the sculpture, but don't they eat the body of Christ in the communion ritual?

Buddhists make holy images from butter. Pagans revere naked gods (some are so ithyphallic it makes your eyes water) and goddesses. Queer Christians celebrate Jesus in love. When the male disciples rebuked Mary Magdalene for pouring perfume over Jesus' feet, he praised her and rebuked them. I think he'd feel the same way about this. It's a sensual thing. There's even a song by Tom Waits called Chocolate Jesus.

Some of Cavallaro's other work is quite disturbing, particularly the stuff he does to perfectly harmless pillows. It's clearly meant to disturb, to make you think. Just because something disturbs one's sensibilities, that's no reason to ban it or make death threats against the artist. It's interesting that a Catholic spokesperson said "They would never dare do something similar with a chocolate statue of the Prophet Mohammed naked with his genitals exposed during Ramadan." No, because Muslims would make death threats... It's almost as if Muslim extremism is encouraging or licensing other forms of extremism, and there is a climate in which it will eventually become impossible to do or say anything for fear of offending someone. There was a documentary recently about the controversy that surrounded The Life of Brian, which speculated (probably correctly) that the film couldn't have been made in the current climate of fear.
Posted by Yewtree at 7:34 AM No comments: