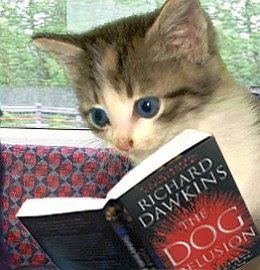 Oh hai! I buhlieved in goggies befaw I read this book. Now I iz nawt so shure...

Hat-tip to Monkey Mind
Posted by Yewtree at 4:50 PM No comments:

Gus di Zerega argues that Pagan clergy is not a good idea.

His first argument is that power corrupts, and a Pagan clergy could become corrupt.

Ye-e-es... Absolute power corrupts absolutely, and all that - but it won't if we don't give Pagan clergy absolute power.

I think it is worthwhile having people properly trained and accredited in counselling skills and having a good overview of Pagan understandings of birth, life, death, and rebirth, ethics and the nature of reality (so they can do chaplaincy work in prisons, hospitals, universities etc). But that does not mean that they thereby gain authority over other Pagans, or authority to speak for other Pagans. If they did, then I would be opposed to having clergy.

A lot of people want to take part in Pagan rituals and spirituality, but not to become a dedicated priest or priestess. Unless we are going to turn these people away, we will need people who are skilled facilitators of ritual and who have an understanding of group dynamics.

There are many different models of clergy, and I think we would do well to examine them all before dismissing the whole concept.

His second argument is that the connotations of clergy (and all the words that are linked to it) are not the same as the terms for Pagan spiritual leaders: priestess, priest, high priestess, high priest, Witch Queen, Magus, healer, medium, shaman, and diviner. Furthermore, he writes:

The critical question is where we will strike a workable balance between what we are now and what society as a whole finds comfortable. In negotiating this cultural dance we should never forget that Western society is based on beliefs that are fundamentally anti-Pagan. The secular world sees nature as mundane, composed in most cases of resources valued for their use to us. Human beings are the acme of existence, and science someday might give us power over the world. Even more important for this present discussion, Western Christian spirituality focuses on the sacred as only or almost entirely transcendent, the world as fallen, radically distrusts individual experience of the sacred, and regards the only truly reliable spiritual knowledge as coming from revealed written words, even if there is no agreement on what they actually say. Moreover, Catholics partially excepted, people continually need to be reminded about the sacred through sermons rather than participating in and reconnecting with the sacred through rituals.

Now that is a much better argument than the first one, and I agree that the style of Pagan ritual (and therefore the functions of the ritualists) is radically different from that of other traditions.

However, the training offered at Cherry Hill looks very Pagan and not at all conforming to mainline Protestant expectations.

His third argument is that the reason we seem to need some kind of official 'clergy' status is because church and state are still not as separate as they should be. He argues that we already have access to prisons, hospitals, and so on, and that we already do public ritual, so we don't need clergy for that. Also, he writes:

[F]or me the term 'laity' is as dangerous a term as 'clergy.' It suggests a sharp distinction between two groups rather than the complex blends we have as Pagans. We are focusing on divine immanence, not transcendence. This means we believe the sacred can be accessed everywhere when approached properly. Therefore the complex areas of life where spirituality and the mundane come together are even more an issue for Pagans than Christians. For this very reason, I think it would be a mistake creating the clergy/laity distinction.

Again, this argument is more convincing than the first. But perhaps we do need a collective name for the various different roles that people perform in ritual and beyond it.

On the other hand, as Chip O'Brien says in his comment on the third article:

I don't want to ask my office worker friend to marry my partner and me. I don't want to search for a priestess and wonder whether she's run this ceremony before, whether she's studied our traditions or just another New Age opportunist out to suck our community dry. Ultimately, I don't want to remain as we are now: bereft of role models, utterly lost when we fall into depression and spiritual questioning because there's no one we can talk to except our peers, who don't know any more than we do. This isn't about surrendering my personal power so someone else can provide my answers on a plate-- it's the fact that I don't have all the time and resources I'd need to be comfortable with myself as my only spiritual authority. In rough times, even the best of us may need some help hearing the gods again.

I think this last point is very important - I have recently been through a spiritually fallow period, and was greatly helped by having other Pagans to discuss my issues with; but I think I would have benefited from having someone to talk it through with who really understood all the issues and the theology. A full-time priest or priestess would have been helpful; but are we willing to contribute the funds to support full-time practitioners? I think most people, suspicious that clergy would be trying to wield authority over others, would not be prepared to contribute in any case.
Posted by Yewtree at 12:25 PM 7 comments:

Posted by Yewtree at 3:45 PM No comments:

Email ThisBlogThis!Share to TwitterShare to FacebookShare to Pinterest
Labels: petitions

Not the Nine O'Clock News - Songs of Praise
"Last week, which was Harvest Festival, there was myself, the verger, and a can of baked beans - but this week we're on the telly, so I see the church is full..."

Not the Nine O'Clock News - Monty Python worshippers
"Where two or three are gathered together, there shall they recite the parrot sketch"
(here's the background to this one for those unfamiliar with what it is sending up)

The Apostles' Creed (Not the Nine O'Clock News)
I believe in flying saucers, the Loch Ness monster....

Gay Christian
"God just wants you to have a rotten life" - a wonderful send-up of the tortuous logic of trying to reconcile fundamentalist attitudes with LGBT sexuality
Posted by Yewtree at 3:46 PM 2 comments:

(see also Christians: a spotter's guide)
The Gnostics believed that the world was created by the demiurge and that matter was a trap for our souls which yearn to return to the Divine source.  Grade: E.  Fail.
In contrast to the this, the Orthodox Church believed that nature was good (one of the reasons why they opposed Gnosticism), and actually continued the Jewish custom of aligning its festivals to coincide with the seasons in the Mediterranean.  For example, the date of Easter is the first Sunday after the first full Moon after the Spring Equinox.  They also have nature-related festivals like the blessing of the waters at Epiphany; they love trees; saints like St Seraphim of Sarov who liked to hang out with bears; and their patriarch recently declared polluting the environment to be a sin.  On the downside, the Russian Orthodox Church is currently suppressing a Pagan religion, and seems rather too uncritical of the current government in Russia, which has a very poor environmental record.  They also don't understand that Pagans regard the Divine as immanent in Nature.   Grade: B.  Pass
The Roman Catholic Church tends to view "creation" as being fallen and damaged because of the Fall; but on the plus side they have St Francis of Assisi (patron saint of animals and the environment; author of Brother Sun, Sister Moon).  On the down side,  they disapproved of Teilhard de Chardin, biologist and theologian, and the last Pope excommunicated Matthew Fox who came up with creation spirituality.  Grade: C. Pass.  Could try harder.
Unitarians, UUs and Liberal Quakers, many of whom are pantheists, are often environmental activists.  No talk of dominion or even stewardship here.  Many regard the Divine as immanent in Nature (not too much talk about "creation" and the "Creator" here either). Many embrace process theology. Grade: A.  Distinction.
Protestant attitudes vary from the downright Gnostic all the way to "we are stewards of the world" (which still implies that it somehow belongs to us).  Grade: D.  Fail.
Dominionists, as the name implies, believe that we have dominion over "creation" (and the Rapture's coming soon anyway)  so we can exploit and destroy the environment if we want. They're also deeply misogynistic and homophobic.  Grade: F.  Monumental Fail.
Posted by Yewtree at 2:45 PM No comments:

A new report by the Equality Challenge Unit says that the higher education sector needs to address sexual orientation and trans-status discrimination.

Based on a survey of 4205 staff and students in England, Wales and Northern Ireland the research, led by Professor Gill Valentine at the University of Leeds, found that institutions provide a positive space for LGBT students.

However, there are still high levels of homophobia and discrimination on campus, a factor that contributes to 20% of LGB and 28.5% of trans students suspending their studies. 33.8% of LGB staff and 41% of trans staff who took part in the research have experienced discrimination and abuse from colleagues.

So it seems that higher education is a relatively safe place to be, but not completely safe.
Posted by Yewtree at 1:48 PM No comments: