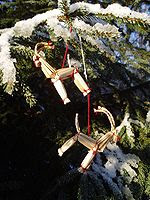 I was wondering if Heelas and Woodhead's four categories of congregational religion were useful for thinking about Pagan and related traditions too.

Some reconstructionists stress the similarity of deities to humanity, do not practice magic, and stress the importance of tradition — could this be an example of a religion of humanity?

Many other Pagans stress the importance of inner experience and cultivate individuality — could this be an example of a religion of experiential humanity?
Posted by Yewtree at 9:44 AM No comments:

Email ThisBlogThis!Share to TwitterShare to FacebookShare to Pinterest
Labels: Paganism

No to bigotry, yes to life

I've written before about the difference between interfaith dialogue, evangelism and proselytising.

Now a particularly sickening and insidious example of "evangelism" (or is it proselytising?) has been highlighted by my fellow Wiccan blogger over at Witches and Scientists.

So, a message to Christians of an evangelical and/or proselytising persuasion:

People of other religions than your own are not "lost". They didn't get "sucked into" the other religion because they somehow failed to notice the existence of Christianity. If they looked at Christianity, they probably rejected the disgusting doctrines espoused by some Christians, but not all, of exclusivity (the idea that only Christians can get to heaven), penal substitution, and the idea that the divine isn't immanent in the world, and is only masculine. They probably rejected the utterly sick idea of "dying to the world and living in Christ". They probably saw the humanity and spirituality of a gay friend and rejected the sick and perverse doctrines that seek to prevent that gay friend living and loving to the full.

Instead, we embraced the idea that all religions are paths to the Divine (with the possible exception of those espousing the above-mentioned doctrines); that the Divine is immanent in the world - that each rock and tree and living being is filled with the Divine - and that the messages of compassion, love and spirituality shine forth everywhere, in all times and places. And that all forms of love and pleasure are sacred, rituals of the Goddess of life and love (including same-sex love).

So, no thanks, we don't need the narrow, warped, cramped, life-denying, exclusivist, dreary creed of the sort of Christians who write utter drivel like "Generation Hex".

We are very happy to embrace as kindred spirits the kind of Christians who are prepared to acknowledge that other religions and lifestyles are valid paths to the Divine (and there are many more of them every day, thank the gods) but we will never, never compromise with the evil bigots who promote homophobia, bigotry, and hatred of other religions.
Posted by Yewtree at 9:26 AM 6 comments: