the privatisation of religion

Hell In Little Axe: An Oklahoma Mom’s Chilling Battle With Religious Bigotry (Americans United for Separation of Church and State)

The thing that interests me about this story is that the two mothers who didn't want their children indoctrinated were themselves Christians, but still got labelled as "atheists" by the bigots who ran the school.

The picture here seems a lot more complicated than atheism vs religion -- it's about the privatisation of religion and individual liberty vs state-sponsored religion.

Sociologists of religion (Heelas & Woodhead, The Spiritual Revolution, 2005) have identified four main categories of religious group, which "new" atheists would do well to take note of, since it seems counter-productive to lump all religionists in the same category - many people who practice a religion agree with atheists that secularism is a good thing. 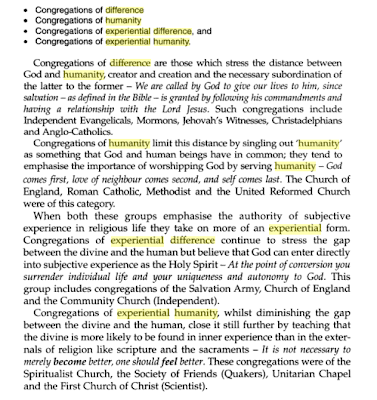 Heelas and Woodhead also identify two main ways of engaging with spirituality: "subjective-life" in which the individual spiritual life is paramount; and "life-as" in which individuality becomes subsumed to the collective identity. These attract different types of people and have very different results. In the past, adherents of subjective-life spirituality were generally regarded as heretics and often killed or persecuted.
Posted by Yewtree at 8:54 AM No comments:

According to the Gender Analyzer, there is an 84% chance that Stroppy Rabbit is written by a man. Well, a friend did once tell me that I am a gay man trapped in the body of a woman...
Posted by Yewtree at 12:08 PM 1 comment:

The Stroppy Rabbit is an INTP, according to Typealyzer, a website that works out the Myers-Briggs personality-type of your writing (spotted by Chas, whose blog is an ISTP):

The logical and analytical type. They are especialy attuned to difficult creative and intellectual challenges and always look for something more complex to dig into. They are great at finding subtle connections between things and imagine far-reaching implications.

They enjoy working with complex things using a lot of concepts and imaginative models of reality. Since they are not very good at seeing and understanding the needs of other people, they might come across as arrogant, impatient and insensitive to people that need some time to understand what they are talking about.

(By Yewtree. If you pass this on to anyone else, please link back here).

See also: Religions as ex-girlfriends by Al Billings
Posted by Yewtree at 4:15 PM No comments:

Just spotted this interesting chart of different religions' attitudes to sexual ethics in 1994. Well, if it was a choice between those seven, I'd rather be a Buddhist. Since they omitted Paganism, here's a summary:


It would be interesting to know if there was any difference between different Pagan traditions on any of these issues.
Posted by Yewtree at 3:49 PM 1 comment:

African "witchcraft" has been in the news again recently.

Here is my view of this issue: